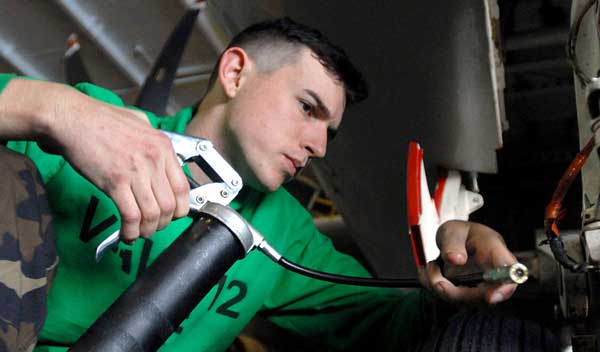 How to Use A Grease Gun Step by Step Guide

Grease guns are widely used in automobile industry and are an inherent part of mechanics. To know how to use a grease gun, you must also understand the various types of it. First, let us know the different kinds of grease guns available.

Whatever may the type of grease gun be, the ultimate aim is to distribute the lubricant. Almost all grease guns function based on a similar mechanism except for the kind of operation.

Parts of a Grease Gun

A grease gun is a combination of different mechanical parts which work in coordination. Before you know how to use a grease gun, it is essential to understand what are the various components of it.

A grease gun will have the following parts:

Now that you know the various types of grease guns and their parts let us dwell into their usage.

How To Use A Grease Gun

Any grease gun to work, it must be loaded with the grease cartridge correctly. Make sure you use an appropriate cartridge and load it appropriately.

Steps in using the grease gun:

The mechanism of using the pneumatic and electric air gun is more or less similar except the way of dispensing the grease. Among all the three variants, a pneumatic grease gun is easier to use.

A pneumatic gun is more precise, less tedious, will not waste the grease, and is very safe to use.

Maintenance of the grease gun is essential so that it will function efficiently. Regular inspection of its parts and rectifying any anomalies will eliminate the defects and keeps the grease gun functional.

1. Which type of grease gun is more reliable?

The pneumatic grease gun is easy to use and more reliable than manual or electric grease guns. It is more precise, and there will be less wastage of the grease.

2. Is it okay to degrease the gun while loading a new grease cartridge?

3. Is it good to tighten up the barrels and nozzles excessively?

No. It is advisable not to tighten up the barrel as there is a chance of developing barrel pressure as high as 15,000 psi. You can always use the air knob to release any excess pressure or air that builds up after using the grease gun.

4. What are the various degreasers which can be used to clean the grease gun?

There are many commercially available degreasers in the market. Some of them include Gumout Carb Cleaner, WD40, etc. But isopropyl alcohol is very useful, cheap and is available widely.

A grease gun is used for lubrication. It helps in lubricating the parts of machinery and enhances their life. The grease gun is a straightforward tool which can be used without any tiresome procedures.

With appropriate care and usage, you can work with grease with ease and hassle-free. Read the instruction manual about the usage and maintenance of the grease gun. Also, you can use any type (manual, pneumatic or electric) according to your convenience.